Auditorium, ummi.ac.id - The Student Executive Board (BEM) of Muhammadiyah University of Sukabumi was officially inaugurated on Saturday (07/13/19).

The board are led by Agung Maulana (Public Administration) whom was inaugurated directly by the Rector of UMMI, Dr. Sakti Alamsyah, M.Pd., at Auditorium of UMMI, Jl. R. Syamsudin, S.H. No. 50 Sukabumi, West Java.

The inauguration was attended by the chairman of the BEM UMMI Demitioner and his staff, delegates of student organizations and the commissariat delegation of the Muhammadiyah Student Association (IMM). 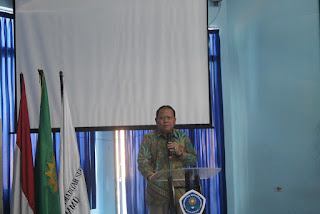 In his speech, Dr. Sakti Alamsyah reminded and appealed to the newly appointed management to be more proactive in the success of the institutional, academic and non-academic agenda.

Meanwhile, Agung Maulana, who has just officially taken office, said we named our Cabinet the name "Harmony". This word is not just a word, many of the values contained in the word that we must implement in organizational life from the smallest things such as building emotional in management. The substance of "Progressing Axis", KM UMMI became a role model of student movements in the city / district of Sukabumi having the characteristics of progressive values and KM-UMMI being a superior student organization. This superior refers to the vision of our campus, which is superior in science and Islam. "We have a program to build partnerships with villages in Sukabumi Regency to create a built village. Because in realizing prosperity for the people we have to start from how we build village community development acceleration, strengthen the people's economy. The Minister of Village says" Accelerating rural development is an important key to Indonesia's economic growth. In addition to mapping the potential of superior products, the village must be encouraged to be able to provide added value to commodities in order to have higher selling power. Thus, people's income will be greater, running a sustainable development program, "he added. (*)